The Board
Home | Who We Are | The Board | Tim Nardi 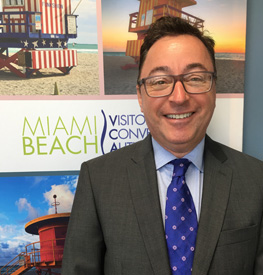 Tim Nardi was appointed to the MBVCA in February 2015 and has been a dedicated and active leader in the Miami Beach hospitality industry for more than two decades. Mr. Nardi is currently the Director of Hotel Operations for Menin Hospitality.  He is responsible for the operational excellence in all areas within the Hotels and has Corporate oversight of Human Resources, Sales, Marketing, and Revenue Management of all Menin Hotels.

Mr. Nardi’s commitment to community involvement and philanthropy have been demonstrated throughout his career. In 2010, Mr. Nardi was appointed by the City of Miami Beach to serve on the Miami Beach Convention Center Advisory Board as well as the developer selection committee for the Convention Center renovation and expansion. For over ten years, Mr. Nardi has been active in the Greater Miami & the Beaches Hotel Association serving as Chairman, Vice Chairman and current Board Member. Over the past 26 years, Mr. Nardi has been an active leader in the Greater Miami Convention and Visitors Bureau where he spent six years on the Board of Directors, ten years as a Sales Development Committee Member, and twenty years on the Finance Committee, where he currently serves. Mr. Nardi has been recognized for his contributions to the local community with numerous awards and accolades including the 2018 Eddy McIntyre Community Service Award by the National Gay & Lesbian Task Force, the 2007 Miami Beach Chamber of Commerce Pillar Trustee Award and the 2008 Outstanding Board of Governors Member, as well as, the City of Miami Beach Proclamation of “Tim Nardi Day” on February 8, 2012.