The Board
Home | Who We Are | The Board | Steven Haas 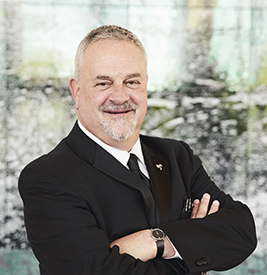 Steven Haas, Miami’s born and bred tastemaker, is currently the new Executive Director for Centerplate at Miami Beach Convention Center. He was previously the chair of the MBVCA from 2004 to 2008 and a board member from 2002 to 2004.

Haas was previously the Immediate Past Chairman of the Board of Directors for the Greater Miami Convention & Visitors Bureau (GMCVB), the first to helm the board from the restaurant sector. Steve created one of the organizations premier programs, Miami Spice. During his time with the GMCVB, Haas helped curate the Miami Begins with Me and Miami Spice Restaurant Month initiatives that advanced the level of standards for customer service and restaurant promotion in Greater Miami and Beaches.

Preeminent restaurateur, entrepreneur, and culinary creator, Haas is a key visionary in the development of Miami’s vibrant food tourism community. Haas enjoys a storied history at some of South Florida’s finest dining establishments. He founded City Hall the Restaurant, located in the heart of Miami’s performing arts district. He was co-owner and operating partner for Soyka Restaurant by News Café Corp. Haas was also the General Manager for China Grill, Tuscan Steak, Red Square, Delano and Social at the Sagamore Hotel. Haas’ extensive pedigree in restaurant management also includes running the world famous The Forge, and positions at Joe’s Stone Crab and Monty’s Stone Crab.